If you dig a little into the history of Americas rodeo’s you will find it has evolved from the Spanish vaquero influences, followed by the tails of the Wild West Shows, including the real deal Annie Oakley. Soon ranchers began to show off their own brand and skills at local ranch rodeo’s. A ‘non-cowboy’ might question the practicality of chasing cows and running around cans. Really it’s a statement that says, my ranch works harder, my horses run faster than yours, or I can ride that bucking animal better and longer than you can.

I became a part this history last season… well, if you count wranglers producing their own rodeo as becoming a part of history, I’ll certainly count it in my books at least. Paradise has a few complete ranch rodeos at the end of the season during the adult only weeks. Personally, this was one of the highlights of last summer, second only to roping my first steer. As a side note, when that happened I really did ride around the arena saying, “I roped a cow, I roped a cow!” Growing up, the only four legged creatures we had were horses and dogs. I learned to throw basic loops last summer and to call a steer, a steer. Now I can see why the guys laughed at me so much. Oh, good times, good times. 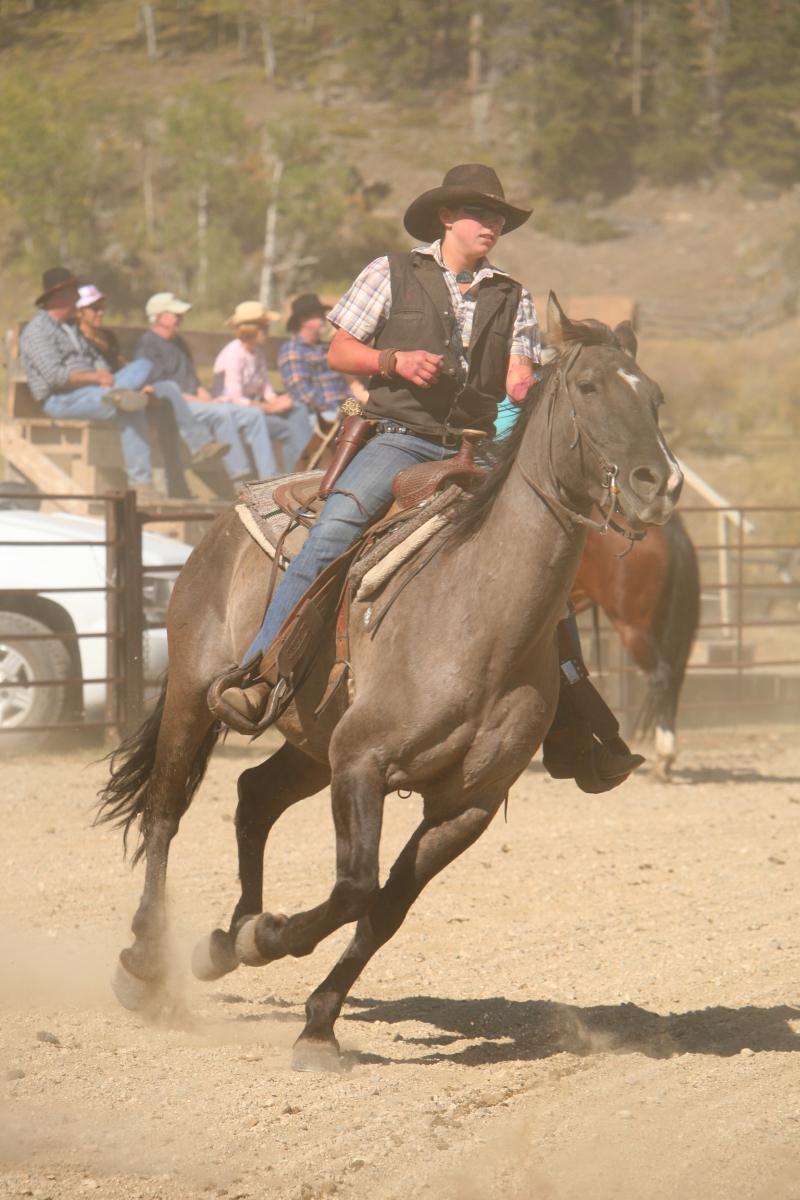 We began the rodeo loping our horses in one at a time and lined up in the middle. Quannah rides in on Maximus. 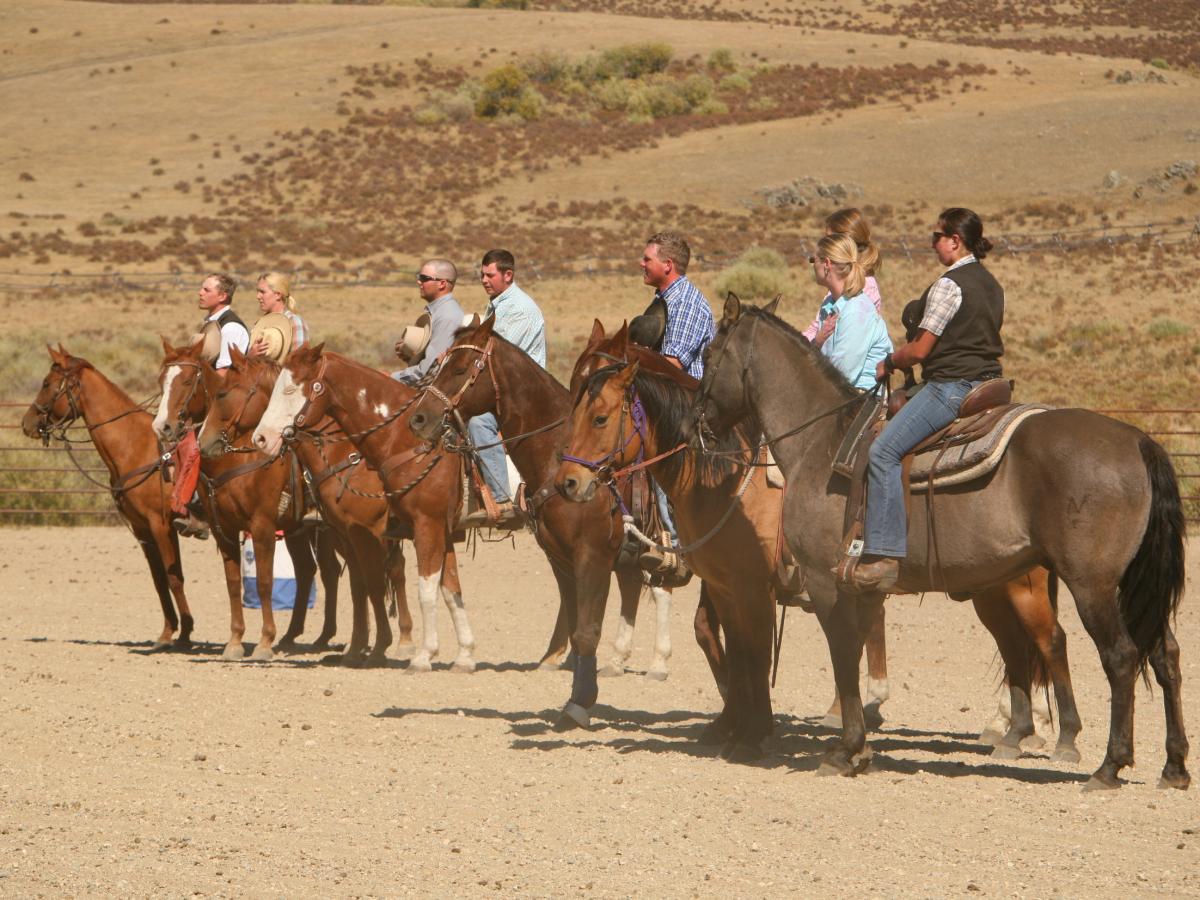 With our hat in our arms we sang the national anthem while Jace presented the flag at a lope around the arena. 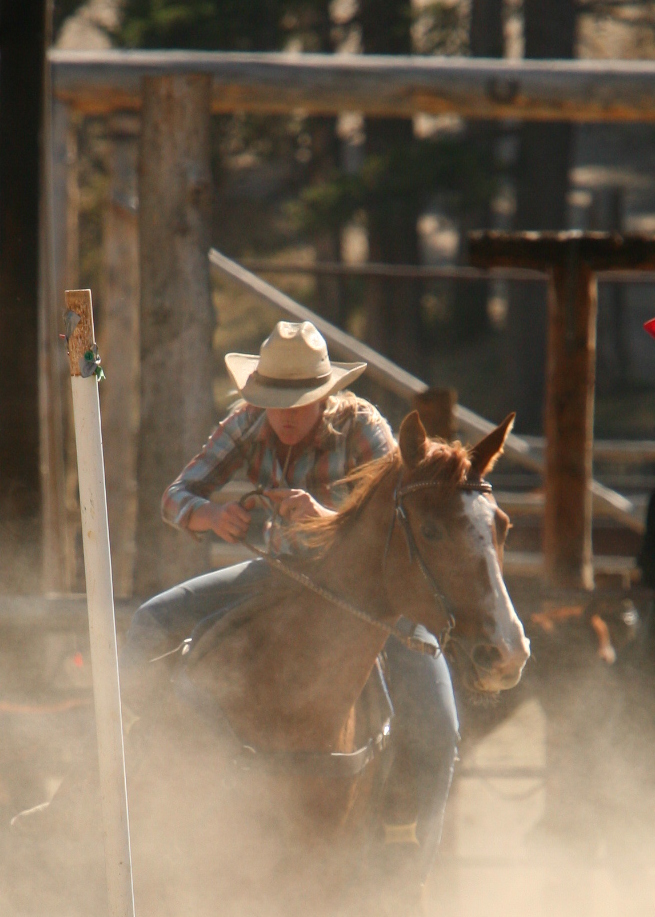 We got down to business right away with timing events. Here is Morgan racing through the dust and poles. 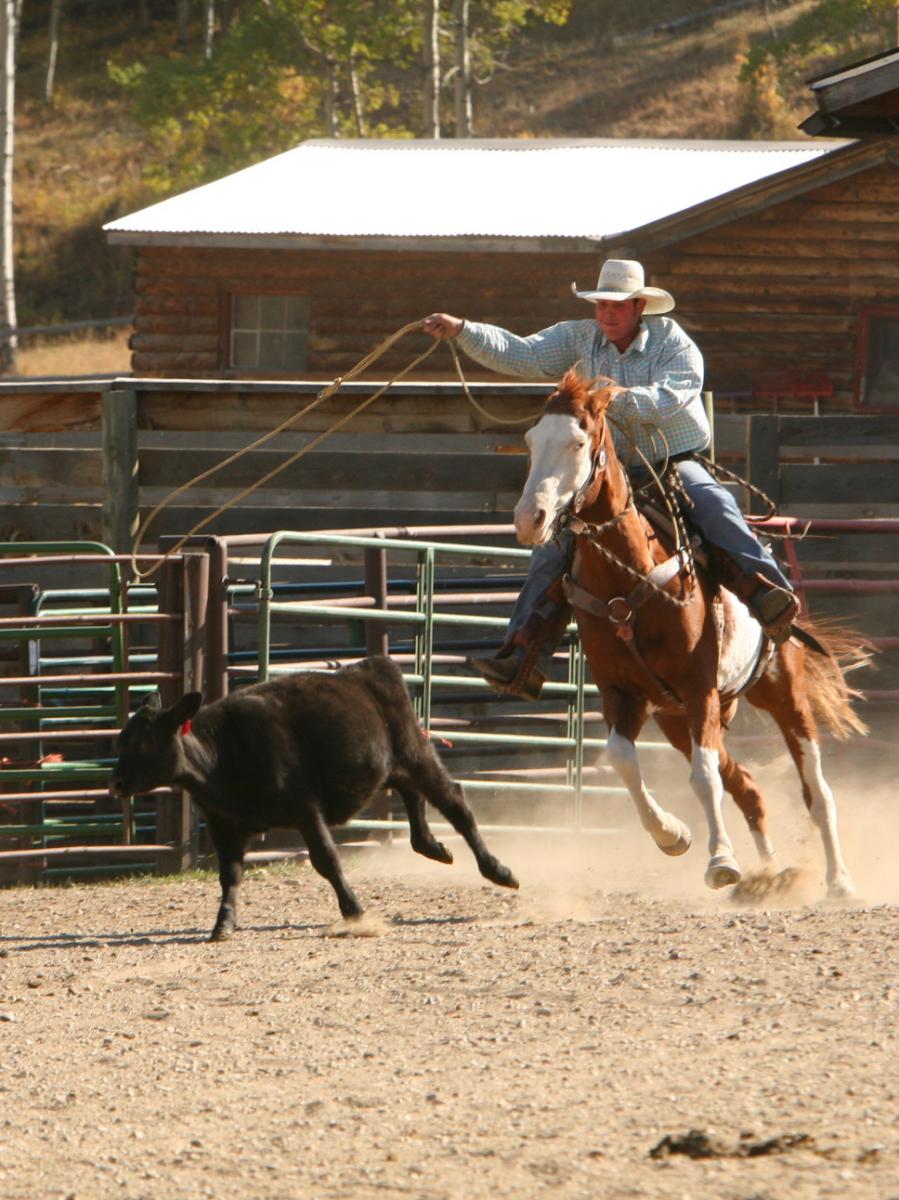 Seek is prepping for a shot on Azule during the calf roping event. 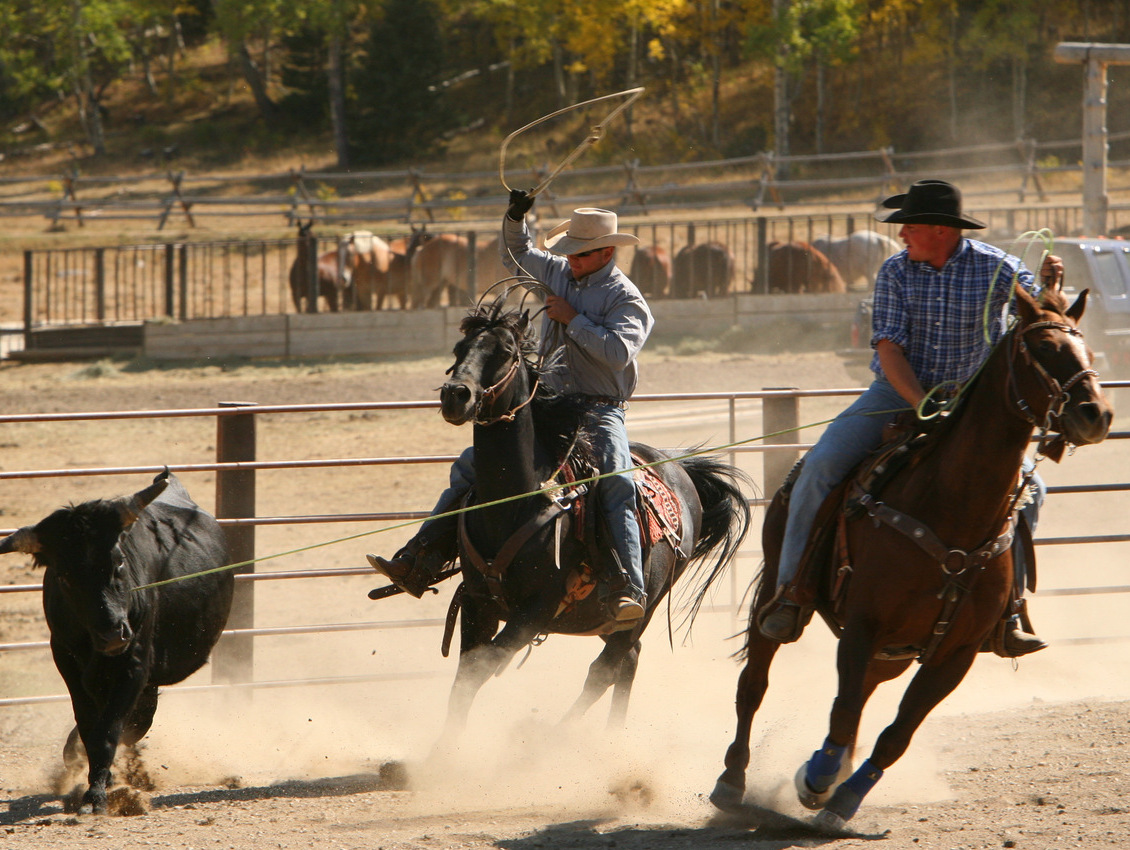 Ben, far right, is setting the steer up for a nice heel shot for Brandon. Recognize Brandon's horse? Yeah, that’s our kid horse Pepper. Who knew mean ole Pepper was a working horse. 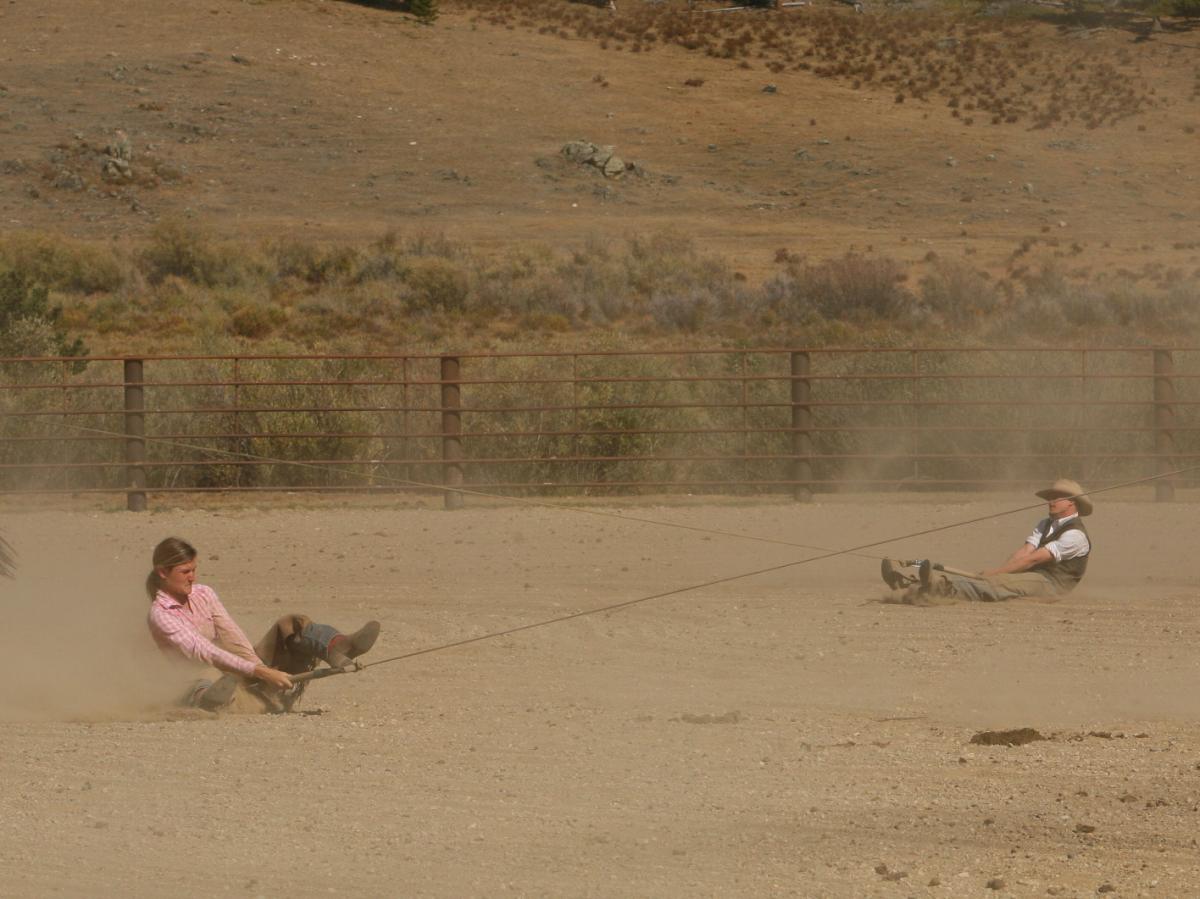 And then here is a point when I made a bad decision. I realized as I sat down on the shovel that a shovel race might not be fun. Luckily, I took home the prize from this shovel race. 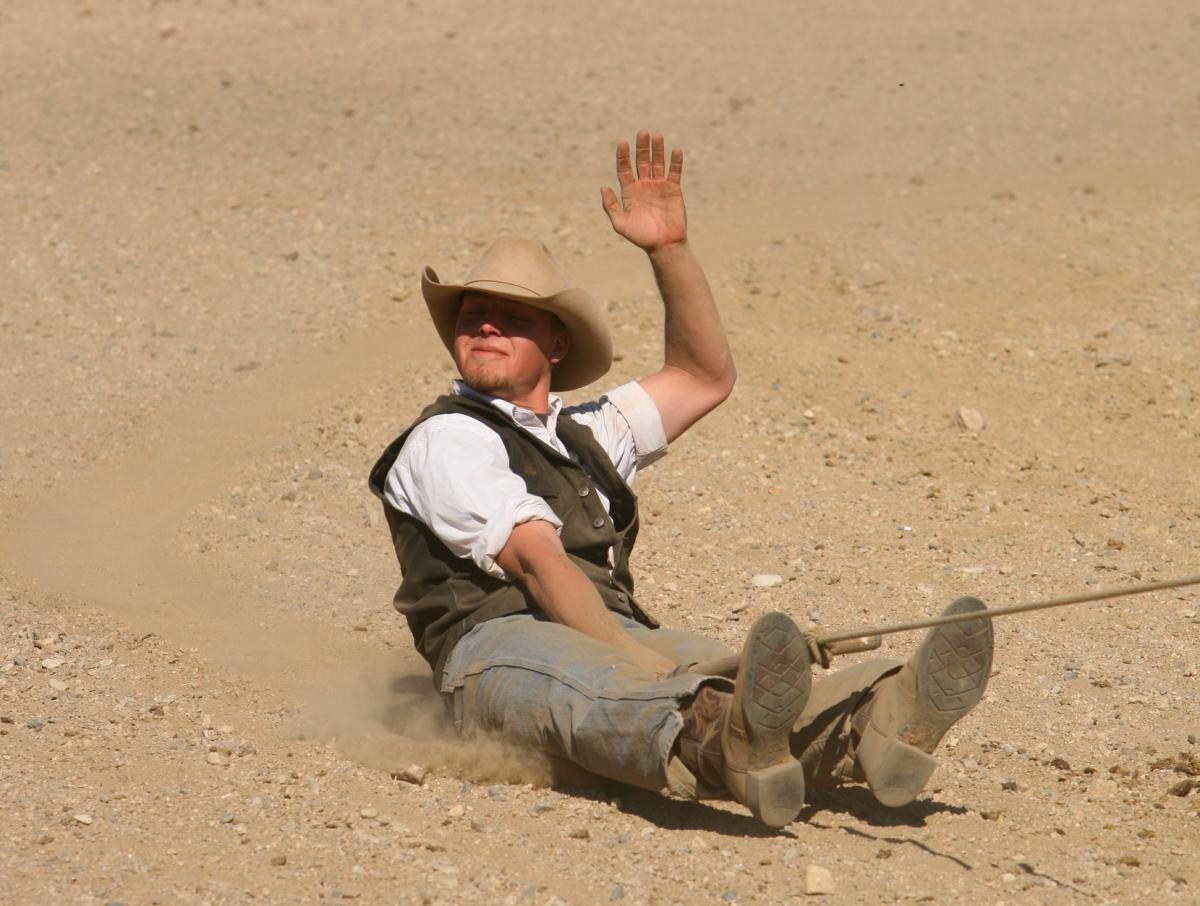 Be that as it may, I think Travis took home the glory. I felt like I ended up with only a mouth full of dirt. 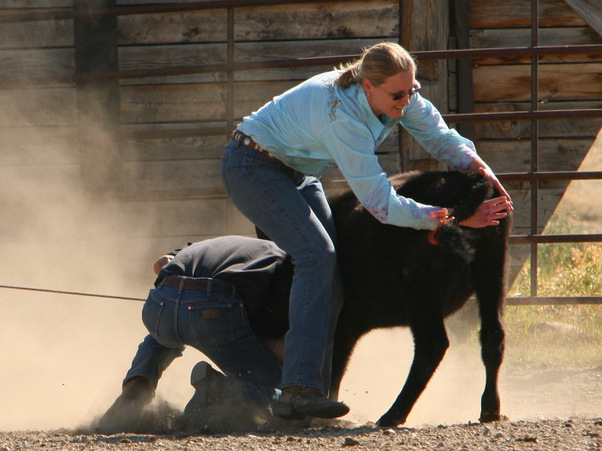 At least I wasn’t the only one took look silly. This is my sister Lydia grabbing the ribbon off the calf’s tail. I wonder where in history this game was invented. 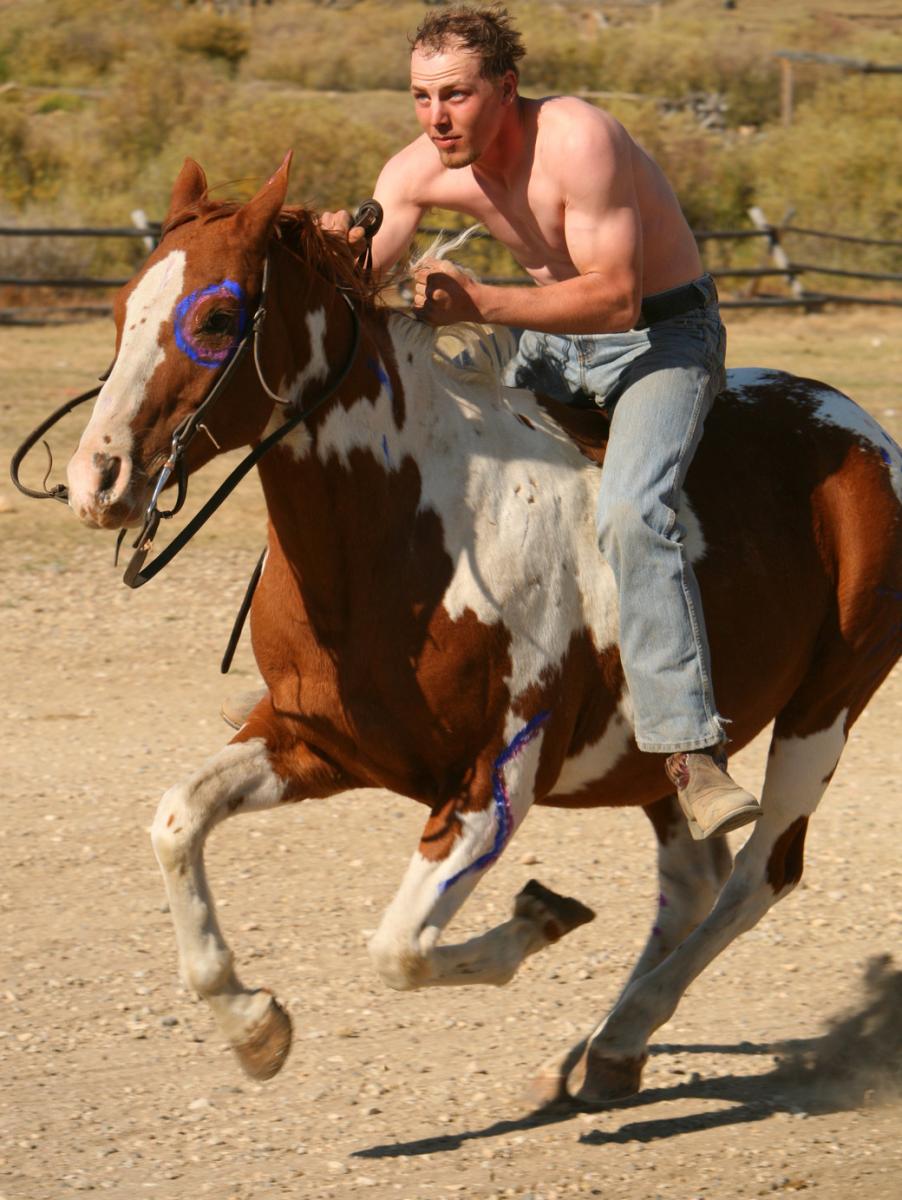 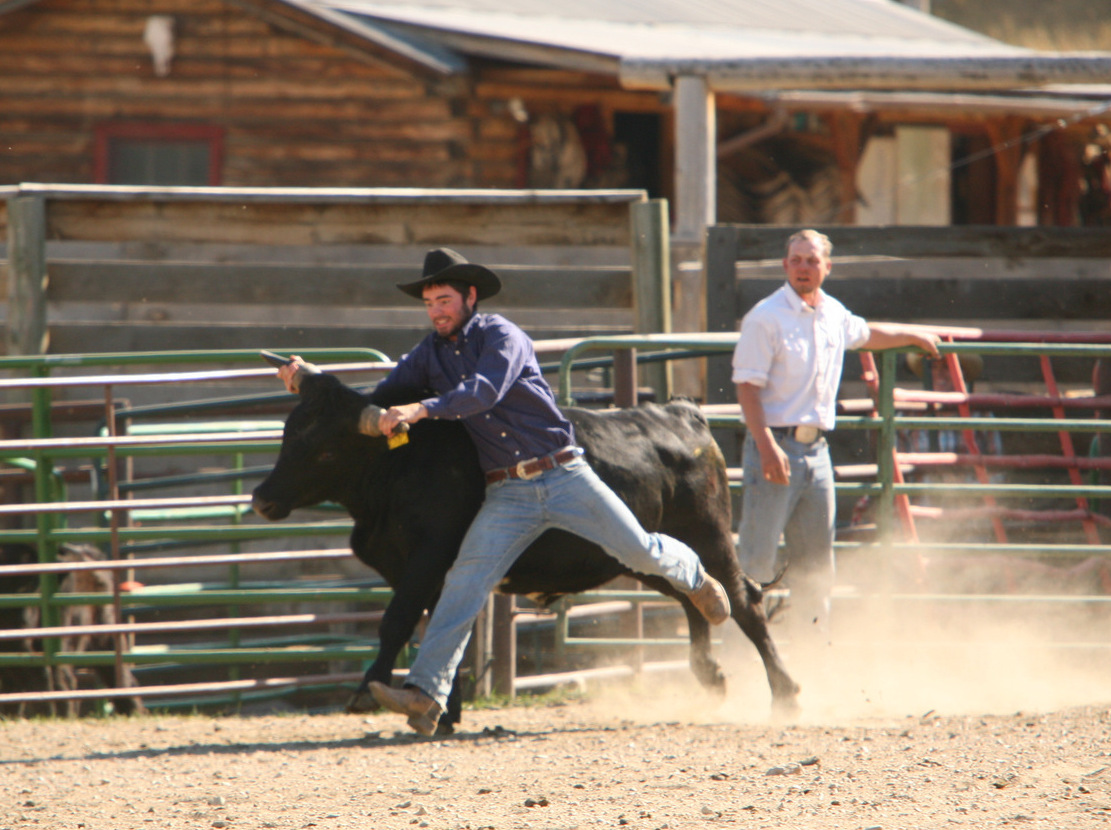 Sometimes racing turned into unplanned chasing. To effectively bulldog a steer, the steer has to be more than a year younger and smaller than this one. Zack, no wonder this big fella isn't stopping. 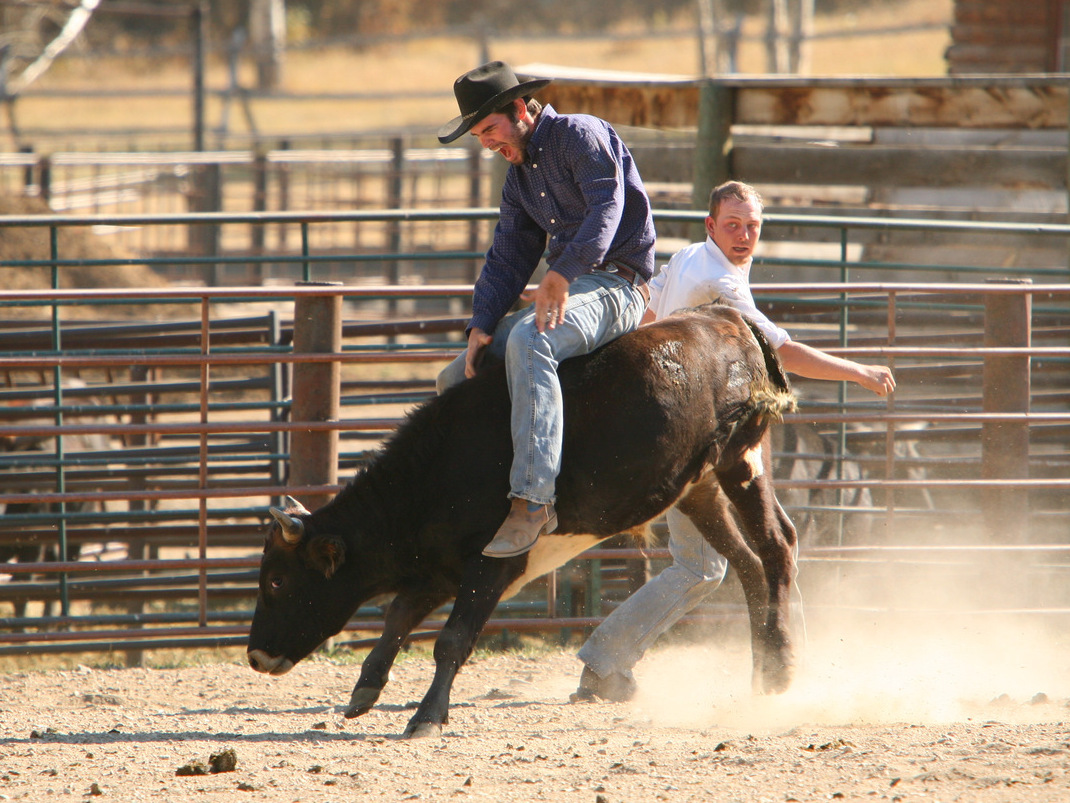 It’s alright; if you can’t wrestle him to the ground you can certainly ride him. Zack takes out his frustration with a big yell. 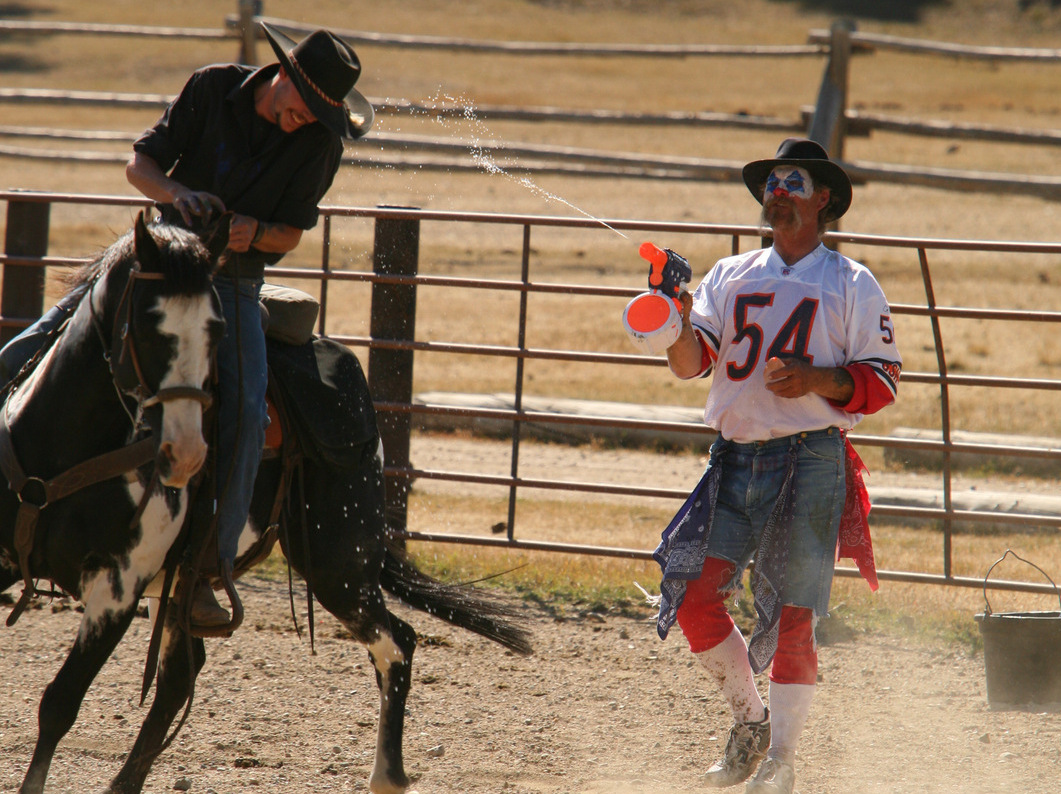 Getting cows set up and changing the arena set up may become boring for our guests. No worries, we have some local talent to entertain. Billy is shooting Jace with his infamous water gun. 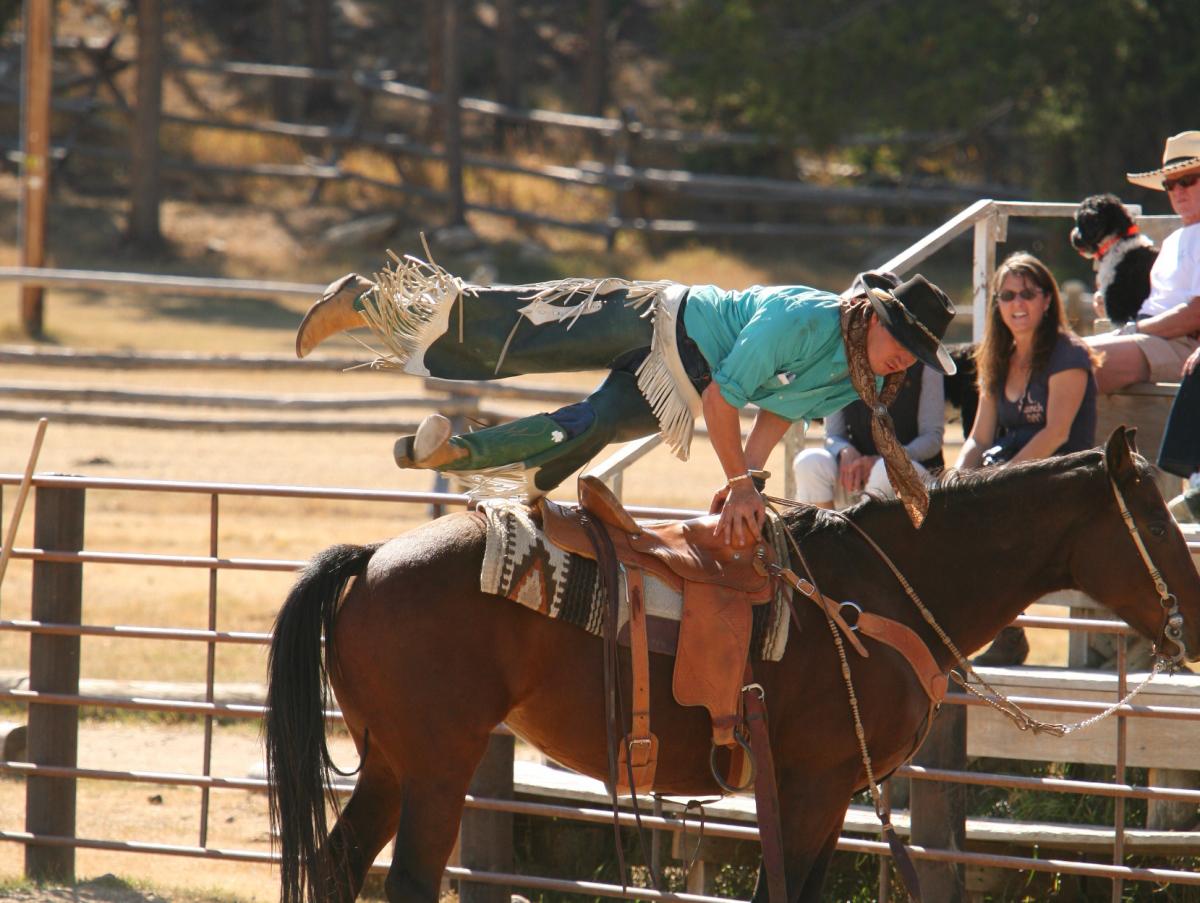 Cade is doing tricks on Lilly. 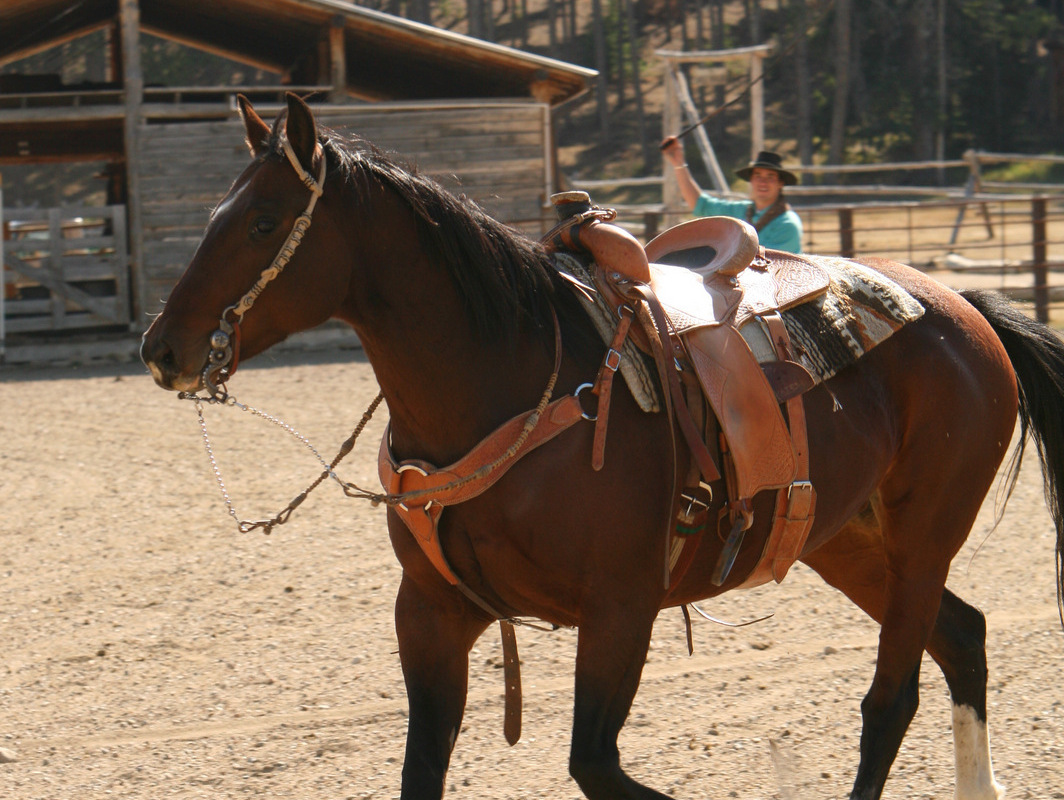 Or maybe Lilly is playing tricks on Cade. 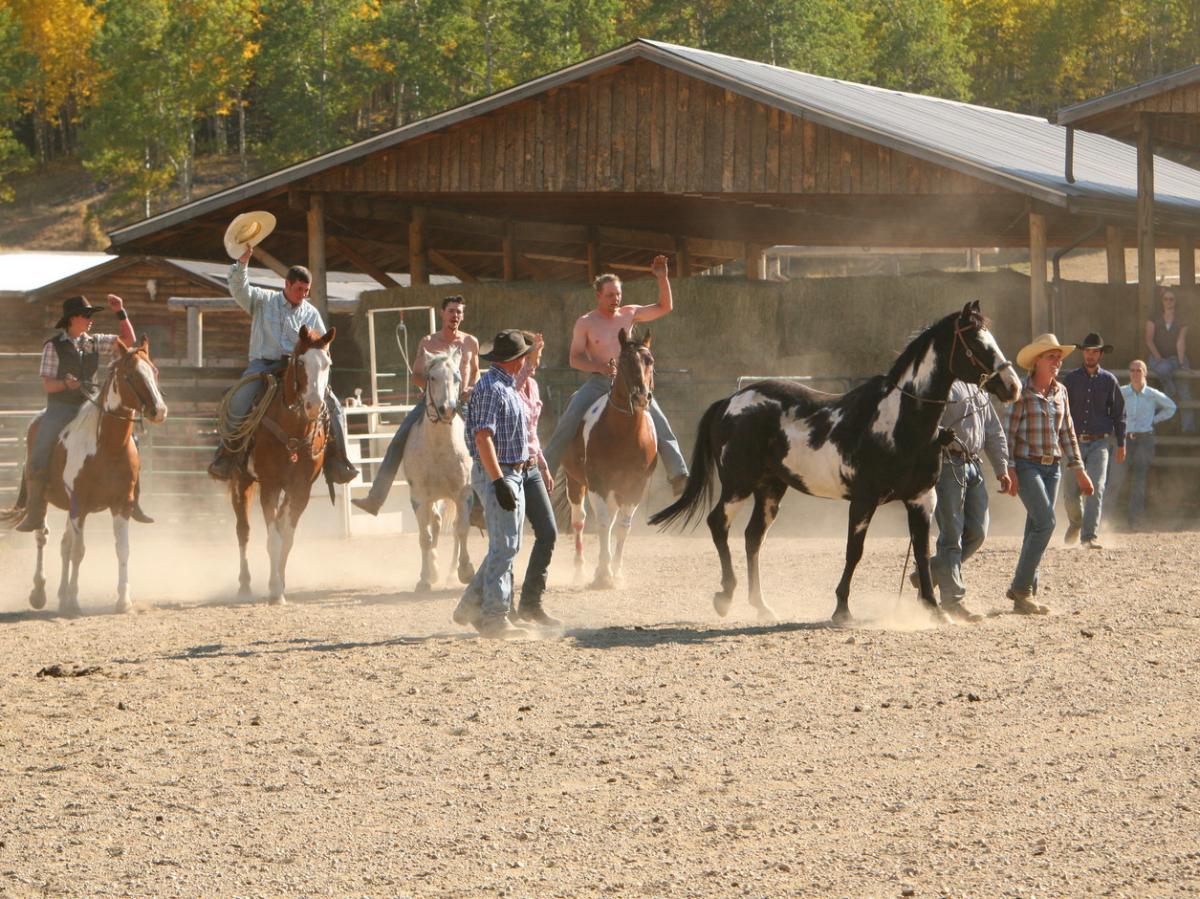 However you see it, we were all pretty proud of putting on a full rodeo. Thanks to Dave Cooley, the ranch photographer, for all the work you do at Paradise. You have captured some pretty cool moments.